Ohio just became the 19th state to update their abortion law to end late-term abortion by limiting abortion to 20 weeks. In 2017, we hope to see Pennsylvania join this growing list. 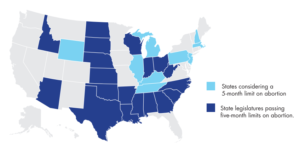 As the discussion continues on whether or not abortion should be limited to the first five-months of pregnancy, here are responses to five false claims some make on a 20-week limit:

False Claim #1: “A woman who is aborting her baby after 20 weeks is doing so because either she or her baby will not be able to make it to the end of the pregnancy.”

The evidence does not support this claim. Consider this 2013 study, “Who seeks abortion at or after 20 weeks?”:

“Data suggest that most women seeking later terminations are not doing so for reasons of fetal anomaly or life endangerment.”

“[W]omen in our study who obtained first-trimester abortions and women who obtained abortions at or after 20 weeks’ gestation were remarkably similar….Participants’ reports of their experiences of deciding to obtain an abortion and of accessing care further show similarities that run counter to the popular narrative of difference between these two groups. Indeed, three reasons for delay we identified—the woman’s not knowing she was pregnant, having trouble deciding whether she wanted an abortion and disagreeing with the man involved in the pregnancy on the abortion decision—were equally common among early and later abortion seekers.”

False Claim #2: “I personally feel it’s a woman’s personal choice to do what she wants.”

Two-thirds of babies born at 24 weeks survive. How is Ohio or Pennsylvania or any state willing to allow a mother to abort a baby whom would survive if born at the same time?

False Claim #4: “Americans don’t want this – get on with other more important issues.”

Poll after poll has shown the majority of people favor abortion limits to 20 weeks of pregnancy.

It is extreme that Pennsylvania children are being torn apart and removed from the womb while the state’s finest children’s hospitals are providing anesthesia and life-saving therapies at the same age of development. Pennsylvania has not updated its abortion law in nearly 30 years. With all the medical advancements over the last three decades, it’s time to end late-term abortion.