Highlights from “Huge Rally” to Stop the Bathroom Bills

An incredible display of support for protecting privacy rights took place in Harrisburg with the Defend My Privacy Rally on Monday, June 27.

Some workers at the Capitol commented that it was the biggest rally of the year, with estimates of over 500 strong standing to tell elected officials to oppose the proposed Bathroom Bills. 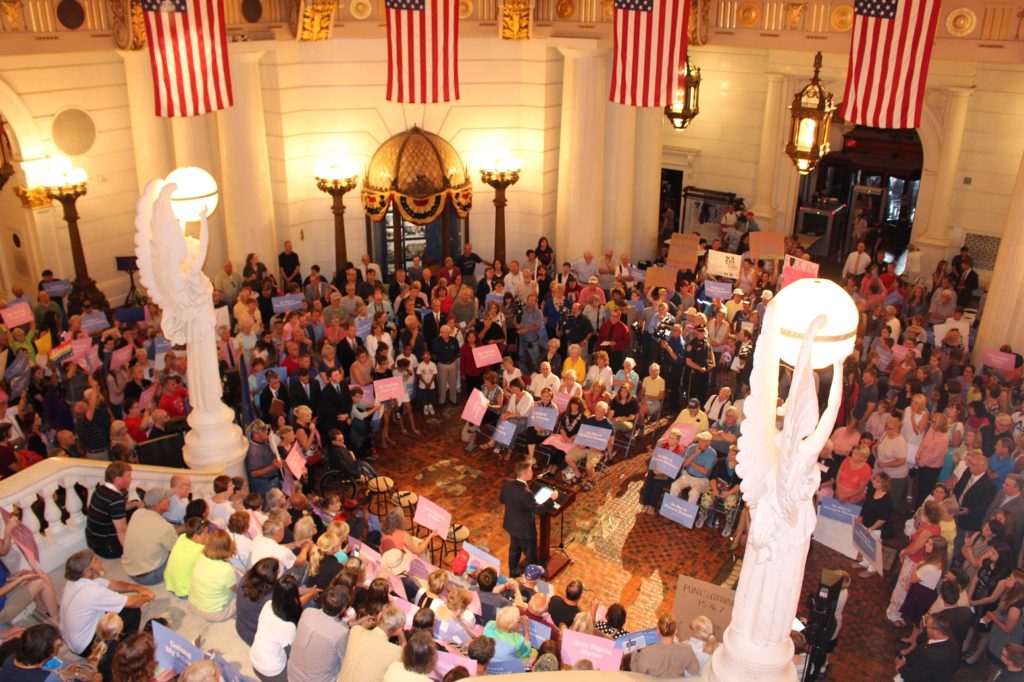 There was an excellent lineup of speakers during the hour-long rally. Here are some of the highlights:

Learning from other states’ mistakes

Joseph Backholm of the Family Policy Institute of Washington came to share the impact of a law passed in 2006 in his state similar to what Pennsylvania is now considering with the Bathroom Bills.

Backholm described how bathroom policies now permit men into women’s locker rooms and restrooms, describing one woman’s experience when she complained about a man using the same locker room and being told that it’s the law now:

“The woman would not give us her last name because she believed if people knew who she was for simply expressing her lack of comfort, she would face professional and personal reprisal for simply defending her privacy.

He also highlighted how there was no crisis requiring a fix in Washington that needed this law and it only caused more problems. Since 2006, there have only been 76 cases alleging discrimination and of those cases, none found probable cause. “This is not a crisis.”

“What some may call discrimination, I call healthy boundaries.”

Backholm continued by pleading to move beyond the talking points. “We all believe in tolerance. We all believe in freedom. I should not have the right to change your behavior because that conforms to my beliefs.”

He concluded with this:

“The favorite tactic of those [in support of this legislation] is intimidation. They will continue to intimidate as long as they think it works. Yes, they have rights. They do not have the right to force everyone to agree or to change. Be kind. Be gracious. Be compassionate. But be courageous.” 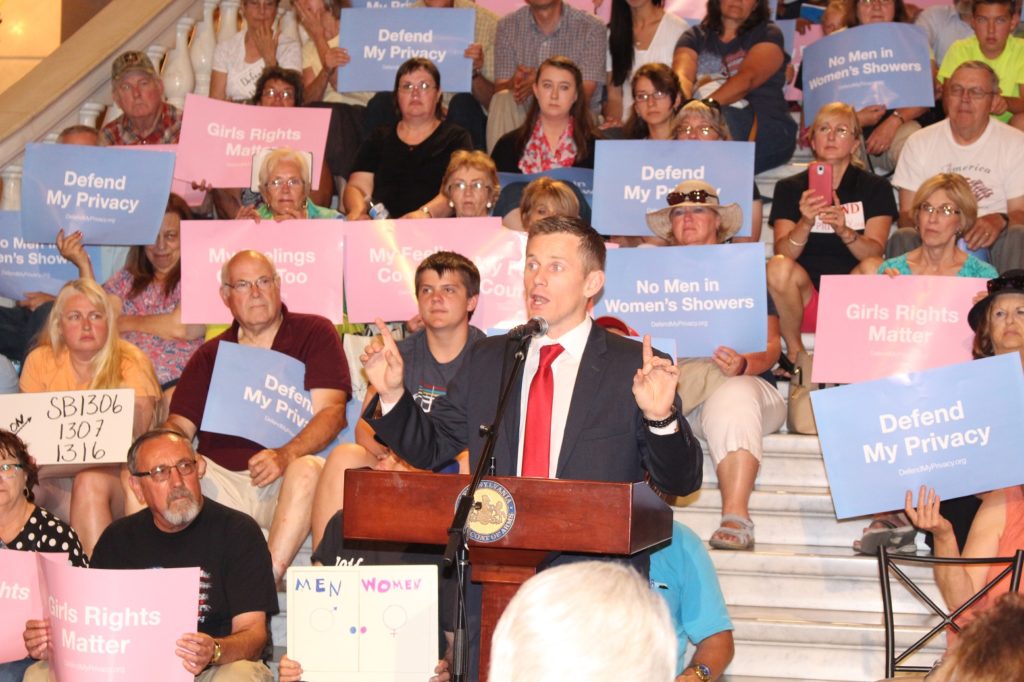 Gretchen Flores shared about her experience with her local YMCA at a child abuse prevention meeting. At the same time a new policy told parents not to show affection to their children as it may be seen as abuse, they were now opening their sex-specific facilities to anyone based on the gender they identified with; allowing men to use the women’s bathrooms and locker rooms and vice versa. (After 200 calls from concerned parents, her local YMCA reversed the policy temporarily.)

“The thought of a man showering next to me in the locker room was just horrific. And I have to tell you why it was especially so.”

Flores went on to share her story as a victim of sexual abuse at the hands of her swimming instructor when she was just 10-years-old.

“I didn’t even tell my mother until I was 30. I would wake up in the middle of the night with cramps in my leg and a sense of terror.”

She pointed out the problems with this change in policy and how there are accommodations that can be met without taking away the privacy rights from anyone.

“The YMCA already had family bathrooms where people can go in and use the restroom. But that wasn’t enough.”

Flores concluded with a great personal example to counter any claim that she is unloving to those who disagree with her position or that she has differences with:

“I’ve been married for 25 years. My husband is a third generation Mexican-American. Our backgrounds are about as different as can be. We disagree on a lot of things but we still love each other. Disagreeing does not equal lack of love.” 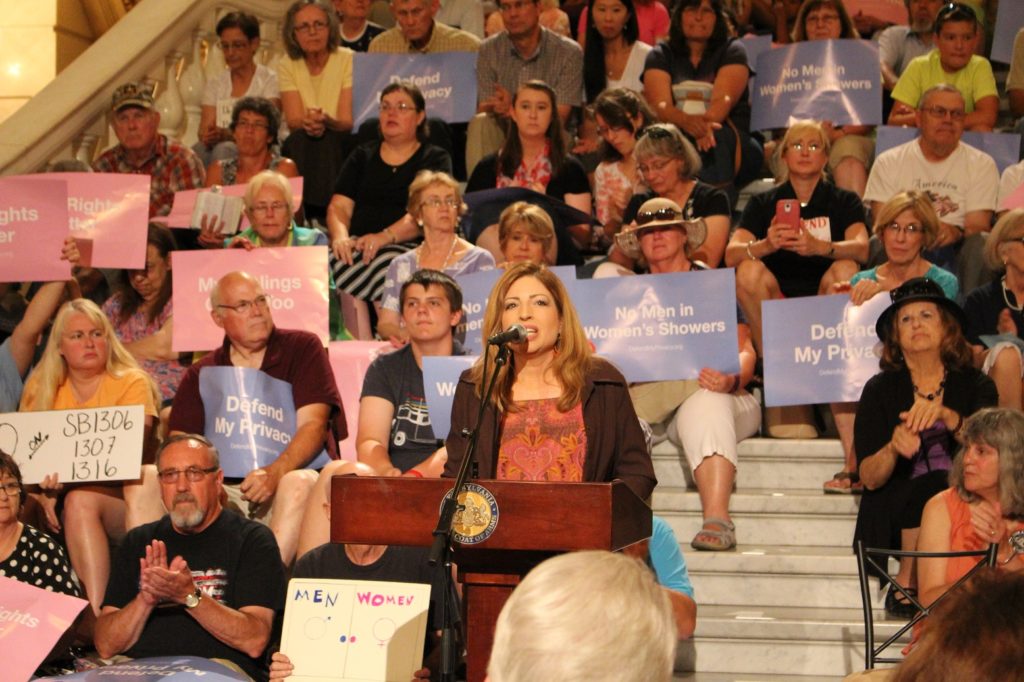 Students stand for the value of purity, modesty, reasonable accommodation

“To impose upon the personal privacy on girls directly attacks the values of modesty and purity.”

The students were asked what they thought about a boy who identifies as a girl using the girls locker room if they had good intentions:

“I would love to be shown respect – whether intentions are good or bad – I am conscientiously upset of a boy coming into the girls locker room.”

Another student, Nathan, made a great point about accommodation from his perspective of being in a wheelchair:

“I’m not able to use every stall in the boys bathroom. What is more – state law requires to make an accommodation for others like me in a similar condition. But I am not arguing that every stall must be fully accessible. Why? Because I appreciate the accommodation. Transgender students seem to want more than a solution and to advance their cause at the expense of privacy and security.”

Michael Geer, president for the Pennsylvania Family Council, charged the crowd with a continued push for contacts with elected leaders, whom some have informed us they are constantly hearing from constituents about defending my privacy, defend my rights of conscience (well done!).

“The pressure to pass this type of legislation is happening all over the country. We need to be involved….Remember – the price of liberty is eternal vigilance.” 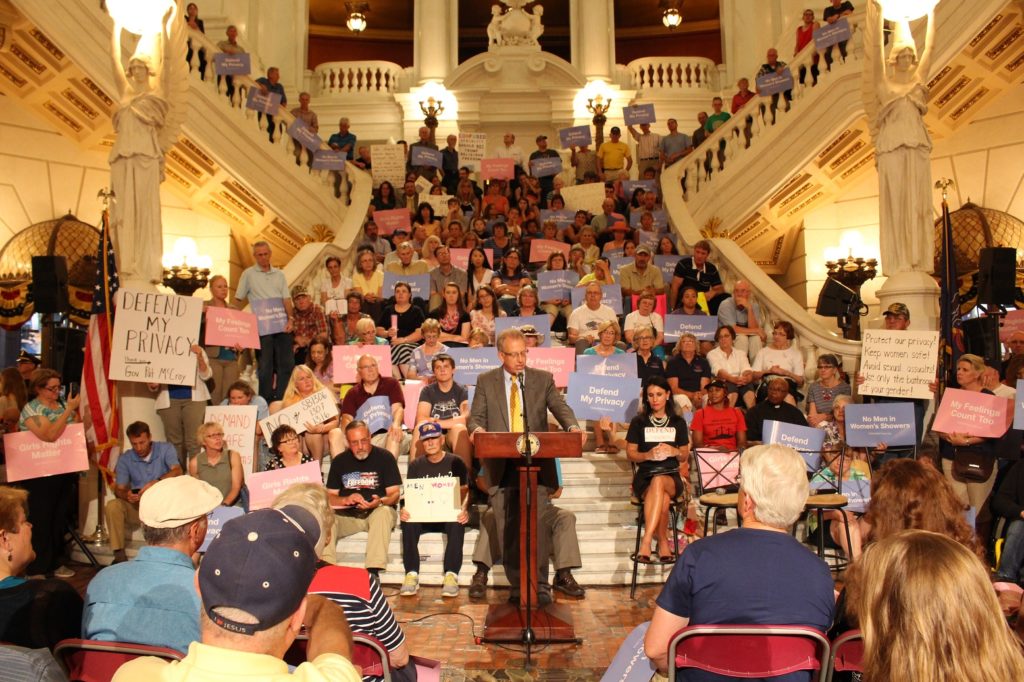 Carla D’Addesi, spokesperson for Defend My Privacy, concluded the rally with this:

“I ask a couple simple yet profound questions. Do you think that every person has the right to privacy? Do you believe that this is a natural and God-given right? Webster’s dictionary states that privacy is the condition of being free from being observed or being disturbed. We at Defend My Privacy with all of you and many more across our great STATE are saying loudly ‘YES’ to these questions. We need you to continue saying NO to the Bathroom Bills as they deny us our right to privacy, modesty, dignity, safety and religious liberties.” 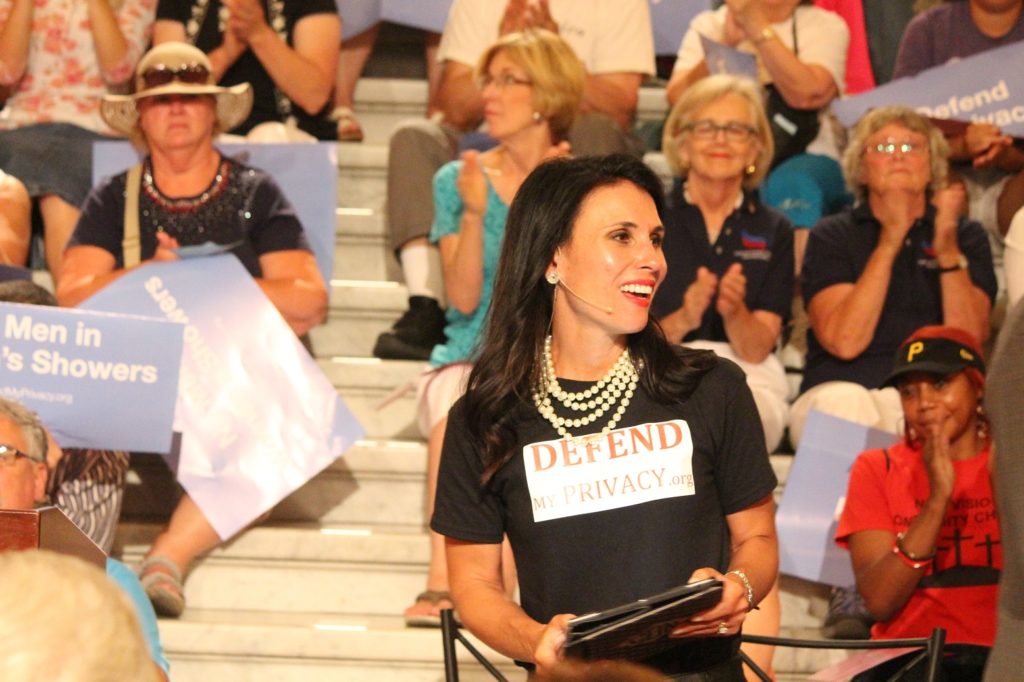 The look on this Bathroom Bill sponsor’s face said it all.

One final highlight: a State Representative that is a sponsor for the Bathroom Bill (HB1510), was seen walking into the Rotunda during the rally. He took one look at everyone, grimaced and left. That was in addition to several legislators who walked by or stopped to observe – one commenting, “Boy, you have a lot of people here.”

The impact of this rally will be felt by every Pennsylvania elected official, whether they are the ones trying to remove privacy rights from Pennsylvanians with these Bathroom Bills or those standing for the protection of our basic rights and opposed to this legislation.

Keep fighting, with eternal vigilance, to protect our privacy rights and freedoms by opposing the Bathroom Bills.