The American Civil Liberties Union (ACLU) of Pennsylvania needs to check its facts before advocating against a much-needed update to state law.

They falsely claim Pennsylvania is trying to ban the most common 2nd-trimester abortion procedure by passing HB 1948; which would end late-term and dismemberment abortions.

According to the Pennsylvania Department of Health, another abortion procedure – called suction curettage – is by far the most common:

The ACLU of PA needs to stop pushing false soundbites and realize that the state’s quarter-century old abortion law should reflect medical advancements and the reality of babies being viable well before the current abortion limit of 24 weeks, 6 days. 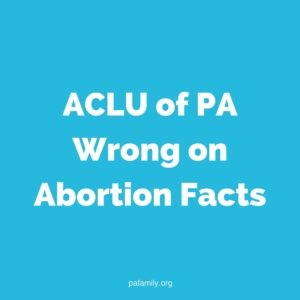