Last week we told you about some courageous men who were being taken to court. May we thank all of our many faithful supporters who lifted up in prayer The King’s Men and their legal team.

Today they were in federal court in Philadelphia because an “adult” oriented business made ridiculous claims in a lawsuit and filed multiple charges against them.

I’m happy to inform you that in court today the “adult” business dismissed all charges against The King’s Men.

As you may know, members of The King’s Men are a presence outside of some “adult” bookstores and strip clubs in Southeastern Pennsylvania, holding signs and encouraging men to stop frequenting such establishments. As you may imagine, many of these “adult” businesses didn’t like it and one attempted to get rid of the protests by taking them to court. 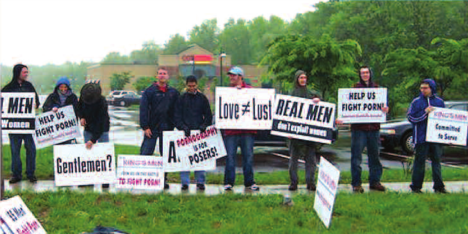 A group of The King’s Men shining a light on pornography outside a local strip club in Quakertown.

“It’s encouraging that as a result of the outcome of this case, our First Amendment freedoms continue to be respected,”  said Randall Wenger (Chief Counsel for the Independence Law Center) as he walked out of the courtroom. “We’re grateful to God that these good Christian men and the organization they serve can continue to be a light to those who are caught in the trap of pornography.”

Today’s result affirms that Christians like the members of The King’s Men have just as much a right to the public square as businesses that make money from sexual degradation.

We wish to thank not just Randall Wenger but the amazing work of the entire legal team led by attorneys Jeff Conrad and Emily Musser-Bell and paralegal Mary Dodds of Clymer Musser & Conrad of Lancaster.

We wish to thank The King’s Men. We’re grateful to represent such a fine group of leaders in Pennsylvania that are doing tremendous work for the glory of God and the advancement of His Kingdom.

And we wish to thank our many supporters who prayed for those involved in this case. It’s the prayers and financial support we receive that sustains a powerful voice for families and freedom in Pennsylvania.

As the legal affiliate of the Pennsylvania Family Institute, the Independence Law Center declares, “We have your back” to individuals, churches and organizations like The King’s Men when freedoms are being attacked.

Click here to request help from the Independence Law Center.

We offer these services in part because of the donations of concerned individuals and families across Pennsylvania. To be a part of supporting our legal work, you may make a secure financial contribution online at www.pafamily.org or call our office at 717-545-0600.